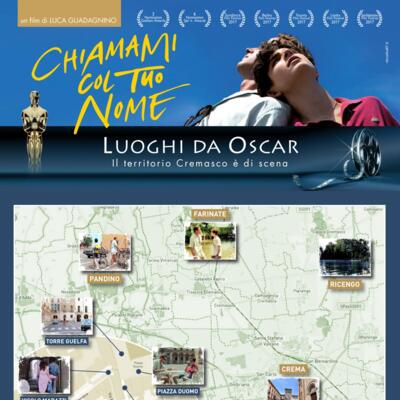 Call Me By Your Name


"Call me by your name" is the famous film by Luca Guadagnino, released in 2017 and winner of the Oscar for best non-original screenplay, which tells the love story between the young Elio and the American student Oliver, on vacation in a place unspecified of Northern Italy. This place is actually the city of Crema, in the province of Cremona, which since the film screening has attracted the interest and curiosity of many tourists, eager to go and discover the places where the poignant film is set. The local Pro Loco is also well aware of this, and precisely to indulge the curiosity of the large Call me by your name fandom has thought of dedicated tours that retrace all the places of the tender love story between Elio and Oliver. So here is TurismoCrema's proposal and the stops not to be missed to relive the atmosphere of "Call me by your name"!

The tourist route to discover the places in Crema shown in "Call me by your name" starts from the central Piazza Duomo: to celebrate the film, the set of the cult scene in which Elio and Oliver chat pleasantly at a bar table has been recreated here. From the cinematic starting point we then start to discover the beauties of the city center: the Cathedral in Lombard Gothic style, the Renaissance-era town hall, the Torrazzo.
Right here in the surrounding area is another of the cult places of the film: the newsstand in front of which the protagonists meet. Just like in the film, the tour continues in via Marazzi, where the building of the same name stands and where several other scenes were shot. In the same street you can also admire Palazzo Benzoni Donati, also known as Manzoni's "Innominato": Alessandro Manzoni himself, in fact, stayed there as a child with his mother.

The walk to discover the places of Call me by your name continues through Piazza Trento and Trieste, where the church of Santo Spirito and Santa Maddalena, the former Church of San Domenico now home to the Theater, are worth a visit, even if not cinematically mentioned. , and the Austro-Hungarian Market. At the end of the square, however, you can recognize the small door and the street - one of the many - through which Oliver and Elio push their bikes.

At the end of the street, finally, Piazza Premoli opens up: here, on the benches in front of the building of the same name, Elio sits with his friend Marzia.

Call me by your name in the Crema countryside
In several scenes, the two protagonists also travel along dirt roads in the countryside of Cremona, reaching villages, groves or fountains: extremely bucolic and typical places of these areas, beaten by tourism well before the release of the film. In fact, as early as the seventeenth century, the nobles used to retire to country villas in the summer, devoting themselves to hunting and nature walks. One of these is Villa Albergoni di Moscazzano, not by chance chosen by Guadagnino as the residence of the Perlman family.

The second itinerary proposed by TurismoCrema therefore also explores the most bucolic locations of “Call me by your name”, as well as the more urban ones, crossing the Cremaschi villages and protected reserves.

One of the cult places is the Laghetto dei Riflessi in Ricengo: here the two different scenes in which Elio and Oliver swim together were shot. The lake is part of the Serio Regional Park, perfect for walks in the midst of nature, picnics and birdwatching. Naturalistic exploration can also be combined with gastronomic exploration: on the shore stands the Al Castel Restaurant, which offers typical dishes of the Cremasca tradition, such as the famous tortelli.
Starting from the place of the film, also in Ricengo it is possible to visit Villa Ghisetti - Giavarina and the Sanctuary of Santa Maria del Cantuello.

Another symbolic place of the film is the Fontanile Quarantina, located in Farinate Capralba, where Elio goes to read, as he tells Oliver. A quiet and peaceful place, where you can relax away from the hustle and bustle of the city and cool off in the summer: the water remains at 11 degrees all year round. The fontaline is the protagonist of an interesting annual initiative, the 'tour of the fountains': a bicycle itinerary organized by the municipalities of Crema and Capralba, open to all, with the aim of raising awareness on the issue of respecting the habitat of the fountains.

At the end of the film, Elio accompanies Oliver to Pandino. The two spend the day together crossing the country, and it is very interesting, visiting it, to notice how the changes to the set have brought it back thirty years: the real estate agency, thanks to a plate, has become a grocery store, the vending machine of cigarettes has been transformed into an ice cream parlor and everything has been replaced with fittings of the time. Here the beautiful Visconti Castle deserves a stop, which can also be visited inside with a local guide. In the main square of Pandino, the two lovers finally pause in front of the War Memorial.


Our Hotel is located in the middle of all these countries
We offer you the possibility of staying in a superior room
Bicycles available in the structure by reservation only
Automatic laundry right in front of the hotel
Indoor swimming pool to enjoy some relaxation
Wifi with fiber in the whole structure!
Sweety and salty breakfast starting at 6.00
Adjacent restaurant for dining